By Craig Hildebrand-BurkeJune 17, 2020 No Comments

On the surface, this seems quite a messy episode of The Leftovers, even if it builds to something unified. Nominally, there’s two main plot threads that we’re following: Kevin tracking down his father who escaped from the psychiatric facility, and Tommy still on the run with Christine.

And yet, we begin with Jill and her friends, and the episode is littered with small moments for her, often alone, or needing aloneness. There’s also glimpses of Matt, of the Guilty Remnant’s various members, and of Nora attempting to jump-start her romance with Kevin.

As such, the episode shifts a lot of worldbuilding weight, bringing together many of the disparate plot strands the season has laid down, as it begins the crescendo into the final act. And it does so by tying everything around a theme of belief.

The opening scene with Jill and her friends pave the way for this exploration. The teenagers are fucking around with an old fridge in the woods, ostensibly a place that now carries the ritual of old pranks and dares, fuelled by the legacy of local urban legends. Jill climbs into the fridge, daring to stay inside the longest, and this moment of nothingness suddenly becomes weighted with significance. Her time in the fridge – extended as the door handle breaks and her panic takes over – occupies this liminal space between life and death, between knowing and unknowing, reality and fantasy. This is where The Leftovers lives, and places, spaces, moments in the show are charged with this portentous feeling. It is just a fridge, but what if, and so on.

Because it’s also the place where Jill’s grandfather can arrive like magic in a bathrobe, free her from suffocation, and disappear again, running through the woods as he absconds from his facility. Later, he tells her the voices told him where to find her, and so either we believe that this is a ridiculous contrivance to have him turn up and free her, or the voices are real and thus we plant ourselves firmly in a magical place.

Jill’s grandfather, Kevin Garvey Sr., appears to have begun his erratic behaviour not long after the Sudden Departure. From the brief discussion of his breakdown, we hear that he burned down a library and some people were hurt. We’re spared too many specifics as this really just seems to be background noise, designed to paint a picture of Kevin Sr. as an unreliable witness, a father-figure that Kevin Jr. is trying hard not to be, despite exhibiting similar tendencies.

Kevin Sr. describes the voices in his head as a constant presence, something he has long become comfortable with. They lead him to Jill, he says, and then later to another library, though not to burn it down this time. It becomes clear he’s in search of a particular National Geographic magazine, a specific issue that he needs to pay for with money he doesn’t have. He tries the library, then asks Jill for money, then ends up with Matt Jamison, who is more than happy to loan him the $200 needed.

It had to be this one magazine, says Kevin Sr., this specific one. He believes in its importance, and that its uniqueness is necessary. ‘You need to accept it,’ he tells Kevin Jr., though why this is, we don’t know yet. The voices have led him this far, and ‘what I hear, what they say, it is the goddamn truth.’

These voices for Kevin Sr. then take on the nature of prophetic visions. If Kevin Sr. predicts something correct from his voices, then does that make him a prophet? And, does that make the voices real? To extend this further, does that also mean that something important is definitely going to happen, because these voices say so? He talks of Kevin Jr.’s purpose, something momentous that he is to do. And it starts with the magazine.

‘You need to accept it.’

Because accepting the magazine is not just taking that one thing. It’s accepting everything Kevin Sr. is saying. It means accepting this belief, regardless of what the truth might be. Doesn’t matter if it’s god, or voices, or some higher purpose. If the person accepts the belief, then it becomes real. It becomes the truth.

Why do we need this?

Kevin is still struggling with these dreams (visions?), this episode showing us a barking dog in a letterbox, scratching to get out, like Jill in the locked fridge. Tommy’s at home but he closes the door on Kevin, and Kevin doesn’t want to shoot the dog in the letterbox, he wants to save it.

And Kevin wakes with a dog-bitten hand and a barking dog in his backyard. Aimee later quizzes him about how much he remembers of bringing the dog home. There are gaps in Kevin’s time, in his memory, and his immediate reaction is to deny this, before flushing all his prescription medication, as if this is the reason why he is becoming disjointed from reality. When he finally gets together with Nora, near the episode’s close, he acknowledges his worries to her, about his state of mind, and following in his father’s footsteps.

Kevin needs to believe in this purpose because otherwise maybe he is going crazy. Nora needs it because otherwise the only thing she knows is that her trauma is completely meaningless to the world. Matt needs it to feel like he can still go on with his mission.

And then there’s Tommy, in Indiana now, still clinging on to Christine and his job of protecting her and the unborn child for the Holy Wayne. Only when Wayne calls, it doesn’t sound like he’s doing too well. He gets Tommy to shift some money, leave it at a dead drop for collection. So Tommy waits, and then follows where this leads, only to discover someone just like him, protecting another young, pregnant Asian woman. They all realise now: we’re not special. We’re not unique. There is no higher purpose to Wayne’s mission. On the phone earlier, Wayne quoted the book of Job:

‘Naked I came from my mother’s womb, and naked I will depart.’

He leaves off the following line: the lord giveth and the lord taketh away. Wayne is conflating himself with god, suggesting firstly that he is the one to give life (the unborn babies and the money he has given Tommy), but he can also take it away as he chooses.

When the other pregnant girl becomes upset that she isn’t unique, that perhaps Wayne’s screed is full of shit, she fires a gun at Tommy and her own carer, calling out ‘he’s the one, he’s the bridge’, meaning the unborn child. A bridge to where?

Maybe Wayne did believe that these children would be his future, maybe just one of them might be. Maybe he’s been justifying his own behaviour for so long with religious psychobabble that he has come to believe it. But then believing can make it real. Tommy returns to Christine and finds she has given birth to a girl. Naked she came from her mother’s womb.

Maybe a child – this child? – can be the way out, a bridge to somewhere, for these characters. Maybe there’s hope if we believe in it.

Fresh from his night with Nora, Kevin greets Jill with a sunny good morning, and entertains the idea of Jill and Nora meeting. This is a happier, more optimistic Kevin than we’ve seen at all. But then he sees the National Geographic magazine, the one he had just rejected as nonsense from his father. The serendipitous nature of it is too much, and he yells at Jill, Jill leaves, the dog barks, and there’s still a way to go for Kevin to find his purpose. He hasn’t accepted it yet. They’re not going to let him off that easy. 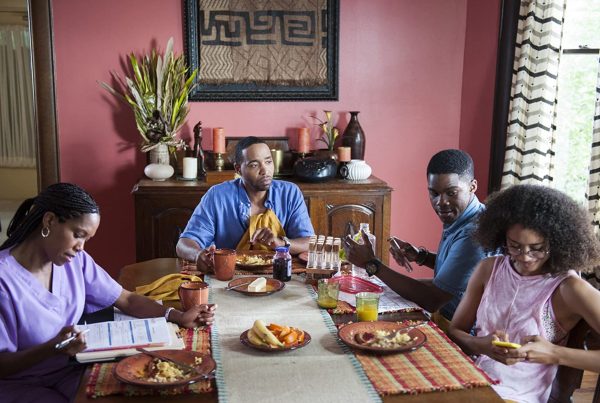